skip to main | skip to sidebar

Requiem for the ARPANET

Like distant islands sundered by the sea,
We had no sense of one community.
We lived and worked apart and rarely knew
that others searched with us for knowledge, too.

Distant ARPA spurred us in our request
and for our part we worked and put to test
new thoughts and theories of computing art;
we deemed it science not, but made a start.

Each time a new machine was built and sold,
we’d add it to our list of needs and told
our source of funds "Alas! Our knowledge loom
will halt ’til it’s in our computer room."

Even ARPA with its vast resources
could not buy us all new teams of horses
every year with which to run the race.
Not even ARPA could keep up that pace!

But, could these new resourcesonot be shared?
Let links be built; machines and men be paired!
Let distance be no barrier! They set
that goal: design and build the ARPANET!

As so it was in nineteen sixty-nine,
a net arose of BBN design.
No circuit switches these, nor net complete
but something new: a packet switching fleet.

The first node occupied UCLA
where protocols and measurement would play
a major role in shaping how the net
would rise to meet the challenges unmet.

The second node, the NIC, was soon installed.
The Network Info Center, it was called.
Hosts and users, services were touted:
to the NIC was network knowledge routed.

Nodes three and four soon joined the other two:
UCSB and UTAH come on cue.
To monitor it all around the clock
at BBN, they built and ran the NOC.

A protocol was built for host-to-host
communication°.  Running coast-to-coast,
below the TELNET and the FTP,
we called this protocol the NCP.

The big surprise for most of us, although
some said they guessed, was another proto-
col used more than all the rest to shuttle
mail in content flaming or most subtle.

When we convened the first I Triple C,
the ARPANET was shown for all to see.
A watershed in packet switching art,
this demo played an overwhelming part.

Within three years the net had grown so large
we had to ask that DCA take charge
to operate a system guaranteed
for R&D and military need°.

Exploring other packet switching modes,
we built the first spread spectrum mobile nodes°
The Packet Radio, the mobile net,
worked on the ground and even in a jet.

Deployed at SAC and Eighteenth Airborne Corps,
the Packet Radio unlocked the door
to what we now know as the Internet.
The driver for it all was PRNET.

The Packet Satellite, another new technique,
was added to the net milieu.
And then to shed more light upon the dark,
there came the Ethernet from Xerox PARC.

To these we added yet another thing
from MIT: a local token ring.
We saw the local net techniques compound
until the list could easily confound.

The Internet foundation thus was laido
Its protocols from many sources made.
And through it all the ARPANET grew more;
It was, for Internet, the central core°.

The hardware of the net was changing, too.
The Honeywell was first, and then the SUE,
which forms the heart of Pluribus today
though where this platform sits one cannot say.

The next big change was called the MBB.
It emulated Honeywell, you see,
so one by one they modified each node,
by means of closely written microcode.

Now known as 30 prefixed with a C,
these nodes are everywhere from A to Zo
The European MINET too was full
of nodes like these from Mons to Instanbul.

The second Autodin was long desired
but once accepted instantly expired.
Then to the rescue rode the ARPANET!
And soon the MILNET by its side was set.

By Nineteen-Eighty DoD opined
its data networks soon must be aligned
with Internetwork protocols, to wit:
by Eighty-Three the TCP was IT!

Soon every host that sat on ARPANET
became a gateway to a local net.
By Eighty-Six new long haul nets appeared
as ARPANET its second decade neared°

The NSFNET and its entourage
began a stately national dressage
and soon was galloping at T1 speed
out distancing its aging peer indeed.

And so, at last, we knew its course had run,
our faithful servant, ARPANET, was done.


It was the first, and being first, was best,


but now we lay it down to ever rest.


Now pause with me a moment, shed some tears.


For auld lang syne, for love, for years and years of
faithful service, duty done, I weep.


Lay down thy packet, now, O friend, and sleep. 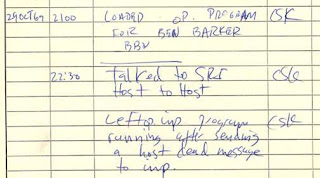 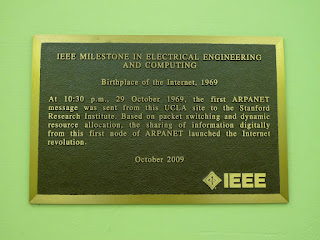 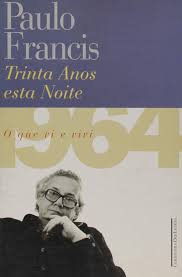 A dose do remédio